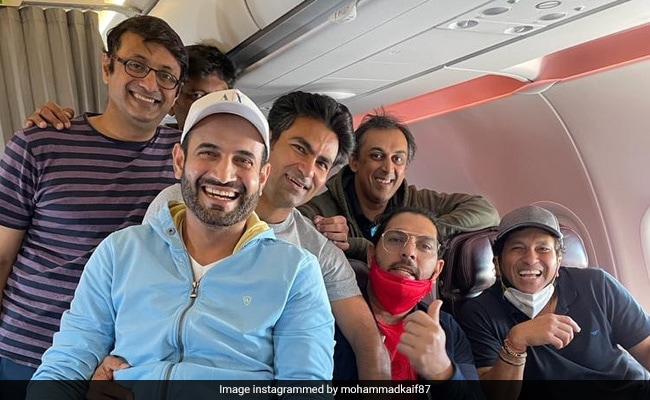 Former Indian cricketer Mohammad Kaif’s Instagram is all about the recently concluded Road Safety World T20 Series. Fans were delighted to see the cricketer with other iconic players, once again on the field. Kaif posted a star-studded picture featuring himself along with Sachin Tendulkar, Irfan Pathan, Yuvraj Singh and others. In the caption, Kaif praised Tendulkar saying, “Last few days we saw him flying high on the ground. And now that the tournament is won, he remains so grounded while we fly. @sachintendulkar paaji.”

The Indian legends beat Sri Lanka Legends by 14 runs to clinch the trophy.

Tendulkar shared the same snap on his Instagram timeline, captioning it as, “A team that chills together, wins together!”

Kaif has been revealing some fun secrets from the tournament through his social media updates. In one of his posts, the right-handed batsman showed how Tendulkar was covered in plasters and straps and still led the team like a boss.

Talking about the tournament, Kaif told news agency ANI earlier, “This is a great concept and I’m sure this is going to work. It is going to get better and better every year. It is like IPL; you keep improving every year. I’m so fortunate to come back again and spend some time with my colleagues.”