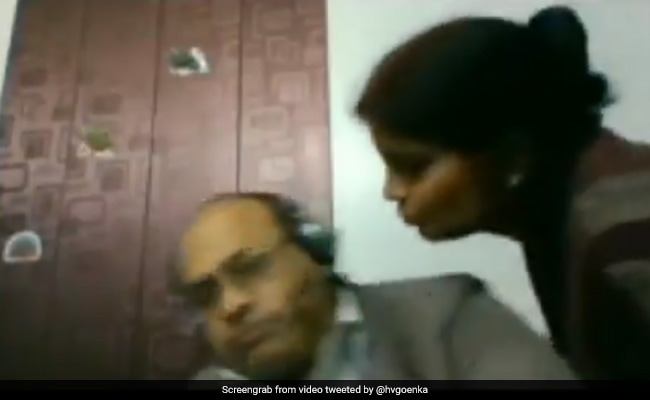 A woman was seen trying to kiss her husband as he spoke to others over a video conferencing link.

A woman was seen trying to kiss her husband during a Zoom call in a video which has now gone viral on social media. In the short clip, which has been doing the rounds of the Internet for the last two weeks, the man was seen talking about the GDP with headphones on when his wife entered the room. Presumably unaware that he was being watched by others on the video conferencing link, she bent down to place a peck on his cheek.

The husband was seen immediately dodging the kiss and pointing to his screen, explaining that he was on call. Annoyed at the interruption, he was also heard asking his wife “What nonsense are you doing”.

The video gained attention after it was shared by businessman Harsh Goenka on Twitter. “Zoom call …..so funny,” he wrote while sharing it. Watch the video below:

Since being posted on the microblogging platform, the video has racked up over half a million views and hundreds of comments.

While many felt that the husband’s annoyed reaction was justified, others felt he should have handled the situation differently.

Among those who commented on his “grouchiness” was businessman Anand Mahindra. “Haha. I nominate the lady as the Wife of the Year,” he wrote while responding to Mr Goenka’s post. “And if the husband had been more indulgent and flattered, I would have nominated them for Couple of the Year but he forfeited that because of his grouchiness!”

Haha. I nominate the lady as the Wife of the Year. And if the husband had been more indulgent and flattered, I would have nominated them for Couple of the Year but he forfeited that because of his grouchiness! @hvgoenkahttps://t.co/MVCnAM0L3W

Others were in agreement with Mr Mahindra.

Some called it the “ultimate work from home blunder”. Amid the coronavirus pandemic, Zoom blunders have become a category in themselves, thanks to the rise of video calls and online meetings.

Last month, a conversation between a doctor and his wife went viral after he got vaccinated without her. In the video which was widely circulated online, the wife was heard berating her husband for getting the Covid vaccine without her.