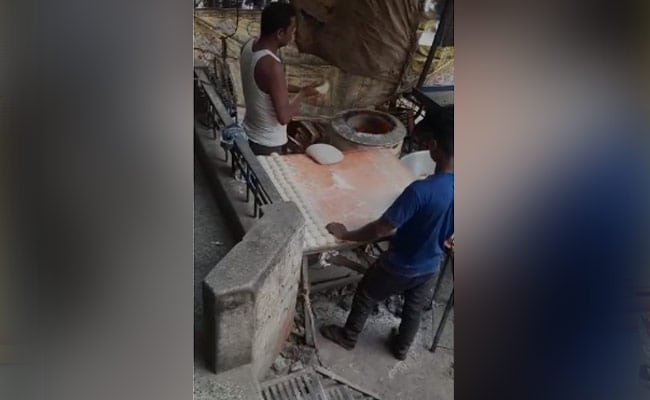 Two Arrested As Clip Shows One Of Them Spitting On Rotis At Delhi Hotel: Police

In the video, a man wearing is seen kneading the dough while the other person is seen preparing “roti”

Two men have been arrested after a video surfaced on social media purportedly showing one of them kneading the dough at a local hotel in west Delhi and the other spitting on the ”roti” (flatbread) just before putting them in the oven, officials said on Thursday.

In the video, a man wearing a blue t-shirt is seen kneading the dough while the other person in a white undershirt is seen preparing the ”roti”.

The police said the man who is seen spitting on the ”rotis” has been identified as Ibrahim.

“After initiating the investigation, it was found that the video was from a local hotel named Chand in the Khyala area. The two men have been identified as Sabi Anwar and Ibrahim, both natives of Kishanganj in Bihar. Ibrahim was spitting on the dough.

“We have registered a case under relevant sections and arrested both the accused. We have also filed a case against the owner of the hotel named Aamir for running the eatery without permission,” a senior police officer said.

According to reports, a man was arrested in Uttar Pradesh’s Meerut last month after he was caught on camera spitting on the dough while preparing ”rotis” at a wedding function.