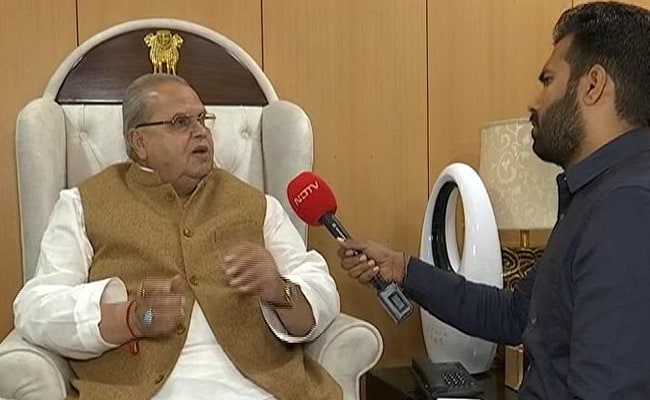 Meghalaya Governor Satya Pal Malik today backed the farmers’ protests against three agricultural laws and criticized the ruling BJP in a series of provocative comments. Mr Malik also predicted loss of support for the BJP in Uttar Pradesh, Rajasthan and Haryana because of the four-month-old agitation outside Delhi’s borders.

“Even when a dog dies it is condoled but 250 farmers have died, yet no one expressed condolences,” said the Governor in an interview to NDTV.

“If this movement continues like this then in the long term, BJP will lose out in western UP, Rajasthan and Haryana,” he said.

Mr Malik claimed he had spoken to Prime Minister Narendra Modi and Home Minister Amit Shah on the protest. “The farmers should not be sent back empty-handed. The government should open talks with them soon,” he remarked.

Asked whether he was worried at all about his controversial statements as governor, Mr Malik was defiant. “If the government thinks I am harming them then I will step aside. I will speak even if I am not a Governor,” he said.

“I cannot bear to see the state of these farmers. BJP leaders are unable to leave their villages as people are beating MLAs. Those who want to harm the government, they are the ones who do not want a resolution. My statements will not harm the party – rather the opposite as the farmers will feel that someone is speaking up for them.”

Mr Malik, familiar to controversies, was Governor of Jammu and Kashmir when its special status was scrapped in August 2019 and it was turned into two Union Territories. He was transferred to Goa soon after. Last August, he was again shifted, this time to Meghalaya, amid differences with the BJP-led government in Goa.

Thousands of farmers have been protesting since November-end against the laws that the centre brought in last year, pitching them as long overdue reforms that would help improve farm incomes. Farmers, however, want the laws scrapped, saying they will eat into their livelihood and take away the protection of guaranteed prices for their produce.