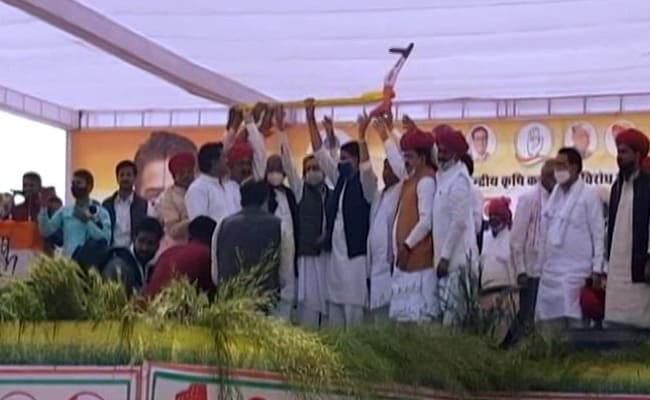 Sachin Pilot held a massive rally near Jaipur on Friday.

The stand-off between Sachin Pilot and Chief Minister Ashok Gehlot in Rajasthan, patched up last year, is seen as making its present felt again. A series of farmers’ rallies organised by the Congress in Rajasthan exposed the faultlines as the party set about following Rahul Gandhi’s instructions to extend support to farmers across the state.

Mr Gandhi had set the ball rolling by holding a series of farmers’ meetings in the state on February 12 and 23. It was followed up by Sachin Pilot with a massive rally near Jaipur on Friday. But no one from the Chief Minister’s camp showed up at the meet, which was attended only by the 17-member faction that accompanied Mr Pilot in his rebellion.

A day later, the Congress unit in Jaipur held a massive rally in the city. Mr Pilot’s loyalists skipped the meet, setting off a political buzz about the two factions pulling in different directions.

The rallies were seen as shows of strength and drawing of bigger crowds seen as a factor to stablish political credentials.

Asked if it was “parallel politics”, Mr Pilot said, “No, no. This is a programme of the party. It has been decided that we all will hold rallies in support of farmers”.

The organiser of the massive turnout, MLA from Chaksu Ved Prakash Solanki said he did offer an invitation to both Chief Minister Ashok Gehlot and the party president in Rajasthan.

“I invited Govind Singh Dotasara, but he had to attend a wedding. I tried to get the Chief Minister too, but did not get an appointment for eight days,” he said.

Mr Dotasera scoffed at the suggestion of factionalism in the party. “The Congress party has a close relationship with farmers. There is no factionalism within. The party stands together. We are just holding rallies to support farmers in our own districts,” Mr Dotasera told NDTV.

Mr Pilot, seen to be behind the party’s revival in Rajasthan after its decimation by the BJP in 2011, was a contender for the Chief Minister’s post. But he was persuaded to take the job of Ashok Gehlot’s deputy by Rahul Gandhi after the party’s victory in the 2018 assembly polls.

The friction between the two has continued since.

Matters came to a head last year after Mr Pilot was summoned for questioning by the state police, which is under the Chief Minister’s control, over alleged deal-making with the BJP to pull down the government. Mr Pilot rebelled, along with 18 loyalists, bringing the Ashok Gehlot government on the brink of collapse.

The bitter stand-off was resolved after more than month with his meeting with Rahul Gandhi and Priyanka Gandhi Vadra.