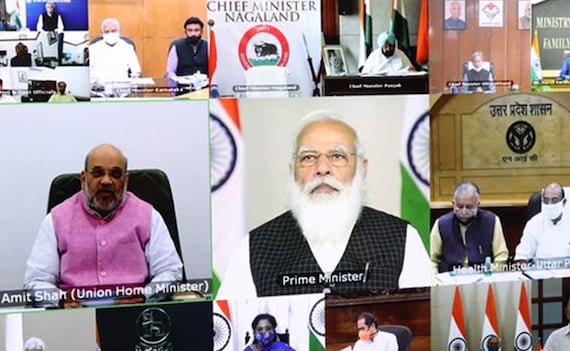 PM Modi is speaking to the Chief Ministers via video conference.

Prime Minister Narendra Modi is meeting with Chief Ministers amid a worrying spike in Covid cases in some states and the centre’s attempts to ramp up the vaccination drive.

Bengal Chief Minister Mamata Banerjee, campaigning for the approaching state election, was missing as PM Modi interacted with Chief Ministers via video conference, as he has done frequently since the coronavirus outbreak a year ago. Chhattisgarh Chief Minister Bhupesh Baghel was also absent.

The average number of Covid cases is at an 81-day high, according to figures.  Cases are now rising in 19 states compared to four just a month ago.

Of 19 districts in India with the highest number of coronavirus cases in the last 10 days, 15 are from Maharashtra, the Union Health Ministry has said. The Centre told the Uddhav Thackeray-led Maharashtra government yesterday that the state was “in the beginning of a second wave of Covid” and that there was a lack of Covid-appropriate behavior and “tracking and testing of cases”.

In the list of the districts contributing the highest numbers to the country’s caseload, only three are from other states. These are Bengaluru Urban in Karnataka, Indore in Madhya Pradesh and Tamil Nadu capital Chennai.

In his last interaction with Chief Ministers, PM Modi had discussed the vaccine roll-out, beginning with nearly three crore healthcare and frontline workers in the first round.

Currently, people over 60 and those above 45 with other illnesses are being vaccinated.