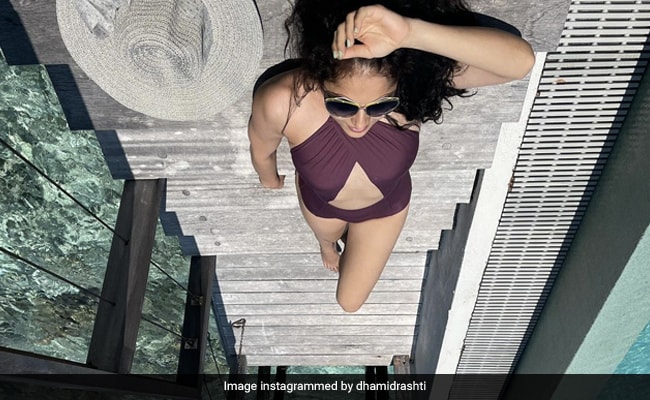 Pics From Drashti Dhami’s Maldives Vacation Are All Things Pretty

TV star Drashti Dhami, who checked into the island nation of Maldives a few days ago, has actively been sharing pictures from her holiday there. The actress, on Sunday, shared a picture perfect frame, in which she can be seen chilling in a bikini. Posting the stunning picture on her Instagram profile, the Madhubala actress wrote in her caption: “Keepin it cool in the pool.” Drashti also shared a photograph, in which she can be seen chilling with the blue waters of Maldives in the backdrop. She opted for purple swimwear and black sunglasses. She captioned the post: “Tropic like it’s hot.” The pictures are burning up Instagram and how. The actress’ Instafam filled up the comments section of her post with fire and heart-eyed emojis.

Drashti Dhami, a popular name in the Hindi television circuit, made her debut in the Indian entertainment industry with the popular 2007 show Dill Mill Gayye. However, her break through role was in Madhubala – Ek Ishq Ek Junoon. The actress has also featured in TV shows such as Pardes Mein Hai Mera Dil, Ek Tha Raja Ek Thi Rani and Silsila Badalte Rishton Ka among many others.