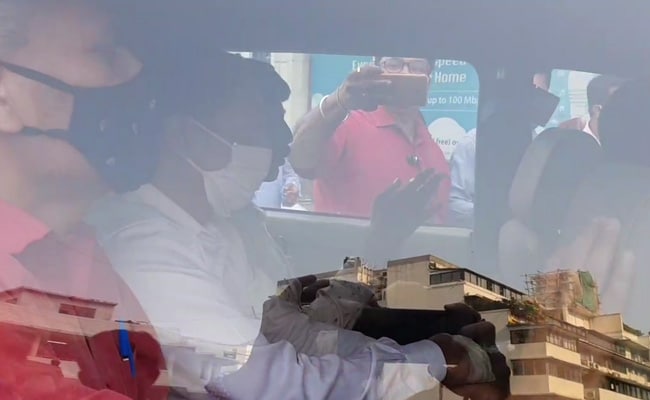 Sachin Vaze’s anticipatory bail plea was rejectd by a Thane court on Friday.

The National Investigation Agency (NIA) has arrested Maharashtra Assistant Police Inspector Sachin Vaze for his alleged role in placing an explosives-laden vehicle near the residence of Reliance Industries chief Mukesh Ambani last month. He was taken into custody late last night at the end of around 12 hours of questioning at the agency’s office in the state capital. He was brought to the premise again this morning.

Mr Vaze is also under probe by the Maharashtra Anti-Terrorism Squad (ATS) in connection with two other related cases: The first involving the death of Mansukh Hiran, a Thane-based businessman to whom the car found on Mumbai’s Carmichael Road on February 25 was traced. The second pertains to the same vehicle’s theft as reported on February 17 by the auto parts dealer. The officer had allegedly borrowed the SUV for around four months till he returned it on February 5, according to Mr Hiran’s wife who also alleged his involvement in her husband’s death.

Referring to the arrest, the Shiv Sena’s Sanjay Raut backed Mr Vaze and said that there was no need for the NIA to get involved in the matter.

“I believe Sachin Waze is a very honest and capable officer. He has been arrested in connection with gelatin sticks that were found. One suspicious death also occurred. It’s Mumbai Police’s responsibility to investigate the matter. No central team was needed,” Mr Raut told ANI.

He said the repeated interference by Central agencies demoralises the Mumbai police and “creates instability”.

“We respect NIA but our police could’ve done it too. Mumbai Police and ATS are well respected but central agencies repeatedly enter Mumbai and demoralise Mumbai Police. It creates instability in the state and creates pressure on Mumbai police and administration,” he said.

On Friday, Mr Vaze had filed an anticipatory bail plea at the Thane district sessions court and sought interim protection from arrest, terming the case against him “baseless” and a “witch-hunt”. His plea for interim protection was rejected, with the court observing that his custodial interrogation was necessary. A hearing on his bail plea is now scheduled for March 19. The NIA then summoned him to its office yesterday where the ATS, too, joined in later.

Last week, the officer was moved out of the Mumbai crime branch to the Citizen Facilitation Centre (CFC) at the police headquarters. A day before that, on Tuesday, former Maharashtra Chief Minister and leader of the opposition, Devendra Fadnavis, had sought his arrest. Following his transfer to CFC, Chief Minister Uddhav Thackeray said, “Sachin Vaze is not Osama Bin Laden. It is not right to target a person and hang him and then investigate.”

The BJP today demanded that Mr Vaze be subjected to narco-analysis and alleged that the Uddhav Thackeray government was openly trying to protect him. Mr Vaze had, during an earlier period of suspension from service, joined the Shiv Sena which heads the state’s Maharashtra Vikas Aghadi dispensation now.

“Is the government worried that if Sachin Vaze is questioned, the probe will reach the government with new revelations?” state BJP spokesperson Ram Kadam asked today in a letter to Chief Minister Thackeray. “Will the Maharashtra government have the courage to subject Sachin Vaze to a narco-test?”

The explosives-laden Mahindra Scorpio was found near Mr Ambani’s south Mumbai residence with a threat letter inside. The police traced the vehicle back to Mr Hiran, but he claimed it was stolen a week earlier. The case got murkier when the Thane-based trader himself was found dead in a creek near Mumbra town on March 5.

Meanwhile, a message claiming responsibility for placing the vehicle was posted on Telegram late on February 27 night. It demanded a ransom in cryptocurrency, according to the police. The Telegram channel was later traced to a barrack in Delhi’s Tihar jail where Indian Mujahideen terrorist Tehseen Akhtar is housed, police sources told NDTV.