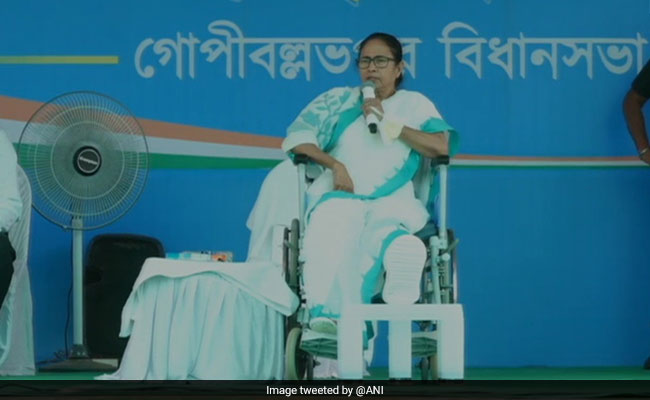 The BJP’s candidate from West Bengal’s hot seat of Nandigram, Suvendu Adhikari, on Wednesday announced that his father Sisir Adhikari, who is a Trinamool MP, will be present at Prime Minister Narendra Modi’s rally on 24th March at Kanthi in the Adhikari family’s home district of East Midnapore.

“Before that, on the 21st of March, I will send my father to Amit Shah’s rally as well,” Suvendu Adhikari said at a public meeting.

Adhikari Senior has been associated with the Trinamool Congress since its inception. But ever since his son switched sides, he has been ambiguous about his support for Chief Minister Mamata Banerjee.

That ended today in an outburst in which he said he didn’t know if he was in Trinamool or not.

“Who said I am in Trinamool? Does Trinamool say so? Ever since Suvendu left the party, they have been abusing my family, my forefathers. A gentleman is coming from Kolkata and calling Suvendu a Mir Jafar, a traitor. I don’t know if I am in Trinamool anymore,” Mr Adhikari said at Kanthi on Wednesday as he left his home for a second shot of the coronavirus vaccine. He is 80.

On Mamata Banerjee, Mr Adhikari was acerbic. “Since Suvendu has left the party, she has come here after him to uproot him. What she is doing here… is an embarrassment, for the district, for the people of Nandigram,” he said.

“A few days ago, she said she was attacked. Some people protested and she said, no, the door of the car hit me. What kind of injury did she get? What kind of doctors are they? A little push and they put her in plaster and a wheelchair?” he said.

“Someone told me the other day the exact same thing had happened in a movie. So, what to do. We are sitting and watching cinema,” Sisir Adhikari said.

Asked if he would go to PM Modi’s rally, he said, “If there is an opportunity, I will certainly go to the Prime Minister’s rally. I don’t see any problem with that.”

Now, that he has taken the Covid vaccines, Mr Adhikari said he was ready to step out and campaign for his son if Suvendu asked him to.

The Trinamool has shrugged off what they say is inevitable. “Sisir Adhikari is 80 years old. At this age he could have retained some dignity and not become a ‘dal badlu’. His distance from the party was inevitable and won’t make any difference to TMC,” said Sougata Roy, Trinamool MP.

Mr Adhikari’s comments have triggered speculation that he may join the BJP. His youngest son Soumendu has already done so. A member of the Trinamool, Soumendu was removed earlier this year from the post of chairman of the Kanthi Municipal Board.

But another Adhikari son, Dibyendu, who is also Trinamool MP, has not joined the BJP yet.

Now, a question mark is hanging over the entire family’s allegiance. The Adhikari family has a traditional hold in the East Midnapore district because of roots there and a history of participation in the freedom struggle. If the entire family changes political loyalties, there is no saying how it would impact the Trinamool’s fortunes in the district, political observers say.