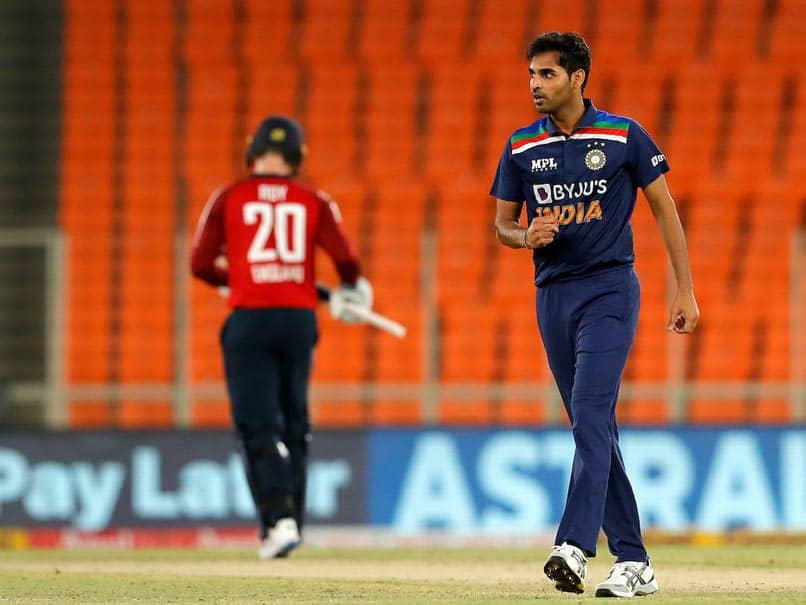 IND vs ENG Live: Bhuvneshwar Kumar during the 5th T20I, at the Narendra Modi Stadium.© BCCI


Currently five wickets down, England are in a precarious position against India in the fifth and final T20I of the five-match series, at the Narendra Modi Stadium in Ahmedabad. Ben Stokes and Chris Jordan are currently batting for England, and will be aiming to build a quick-fire partnership. Bhuvneshwar Kumar has registered two wickets for India and Shardul Thakur has grabbed two dismissals. All-rounder Hardik Pandya has also bagged a wicket for his side. Earlier, India set a target of 225 runs for the visitors. Rohit Sharma (64) and Virat Kohli (80) slammed half-centuries as India reached 224 for two in 20 overs. Kohli was also unbeaten, alongwith Hardik Pandya (38). Suryakumar Yadav also made a decent contribution to the scoreboard, adding 32 runs. The visitors were not in their best form, while bowling. Adil Rashid and Ben Stokes registered a wicket each for England. (LIVE SCORECARD)


Topics mentioned in this article