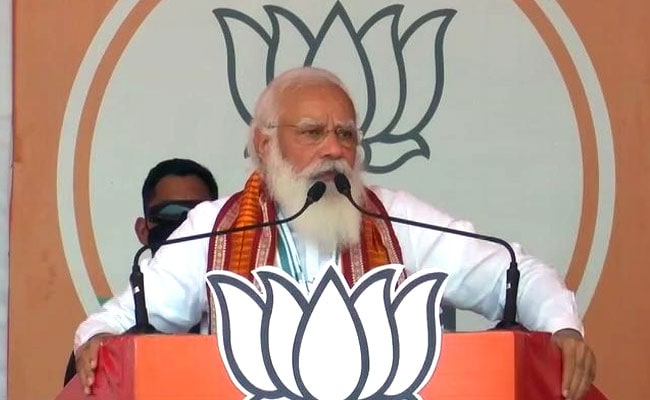 Prime Minister Narendra Modi today ripped into political rivals in Bengal ahead of state elections as he linked Friday’s global social media outage to what he described as a slow pace of development in the state. In his election speech, he attacked Chief Minister Mamata Banerjee and other political parties that have ruled Bengal in the last five decades.

Stressing that the state is desperately waiting for change, the Prime Minister said: “Last night, for 50-55 minutes, WhatsApp, Facebook and Instagram were down that left everyone worried! Here in Bengal, development, belief, dreams have been down for 50-55 years, and thus, I understand your impatience to bring in a change!”

On Friday, Facebook, WhatsApp, Instagram, Facebook Messenger – all Facebook services were briefly down around the world. The services were restored at around 11:30 pm. In his address, PM Modi linked the voters’ expectations with the anxiety of social media users.

Reaching out to the state’s youth and targeting Mamata Banerjee in the same breath, he said: “Didi has wasted 10 very crucial years of the youth of Bengal. Her party is the school of cruelty, and its syllabus is Tolabaji, cut-money, syndicate and is a training centre for harassing and troubling people.”

Accusing the Trinamool Congress of corruption, he said: “Trinamool’s extortion through syndicates has led to many industries shutting down. Only one industry has thrived. Mafia industry.”

Bengal will vote in eight phases to elect its next government, starting March 27. PM Modi today said the state election this time is “not just to choose new MLAs, ministers and chief minister”. “This election is not just to bring about “Paribartan“. It’s also to develop a “Sonar Bangla“. We want to get as many votes as possible for the BJP,” he said today.

With more than 40 star campaigners in a list that include PM Modi, party’s new star recruitment – Mithun Chakraborty – and union ministers, the BJP is trying hard to expand its footprint in this state election.

This morning, the Prime Minister yet again used the Trinamool’s poll slogan – “Khela Hobe (game on) today in his poll speech. “Didi keeps saying, “Khela hobe! The entire Bengal is responding, “Khela sesh hobe, vikaas arombho hobe (Now your game will be over and development will begin)”.

Invoking Dr BR Ambedkar, he added: “Babasaheb Ambedkar has given every citizen has given the right to vote. But Mamata has snatched that right to vote. We saw how this right was crushed in the 2018 panchayat polls. I want to assure the people of Bengal that Didi will not be allowed to do this. Police and administration should remember the constitution. This time what happened in earlier elections won’t happen.”

“I want to assure the youth and women, Dalit and adivasis of Bengal. Don’t let Didi play with the future of Bengal.”