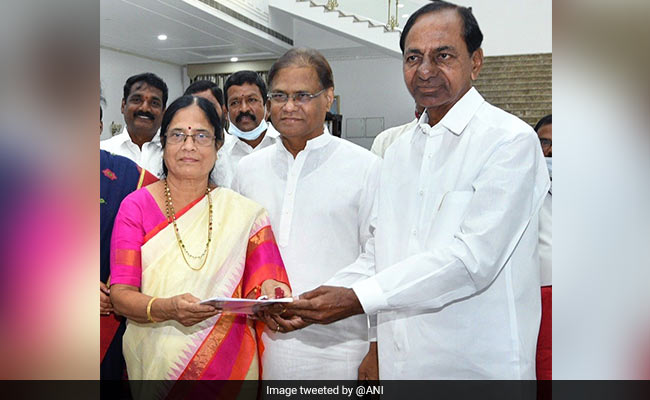 Telangana: Surabhi Vani Devi is an artist and an academic.

Ms Vani Devi, an artist and an academic, will file her nomination papers for the Mahabubnagar-Rangareddy- Hyderabad Graduates’ constituency.

Biennial elections to the Legislative Council from two Graduates’ constituencies will be held on March 14.

The move by Mr Rao or KCR is significant after his high praise last year for Narasimha Rao, a Congress veteran who was Prime Minister in the 1990s and presided over massive economic reforms with Manmohan Singh as his Finance Minister.

Mr Rao, describing him as a “beloved son of Telangana”, paid tribute to the former Prime Minister on his death anniversary and said his reforms in education, economy, land and administration had a lasting impact on the country.

The Chief Minister also projected him as Telangana’s “muddu bidda“- son of the soil – who became the first prime minister from South India.

The Telangana Assembly also passed a resolution urging the Centre to honour Narasimha Rao with the Bharat Ratna and install his statue at parliament.

KCR and his government’s moves to honour the Congress veteran have been linked to pitch about preserving the pride of Telangana and honouring its most famous faces.

Interestingly, the Congress – which is KCR’s rival in Telangana – for years sought to distance itself from the Narasimha Rao legacy after corruption allegations and controversial decisions.

However, last year, Congress chief Sonia Gandhi and her son Rahul Gandhi wrote letters with rare praise for Narasimha Rao, who was the first leader outside of the Nehru-Gandhi family to last a full-term as Prime Minister.

“After a long career in state and national politics he became Prime Minister of India at a time of grave economic crisis. Through his bold leadership, our country was able to overcome many challenges successfully. The Union Budget of July 24, 1991 and paved the way for the economic transformation of our country,” Sonia Gandhi wrote in the letter.