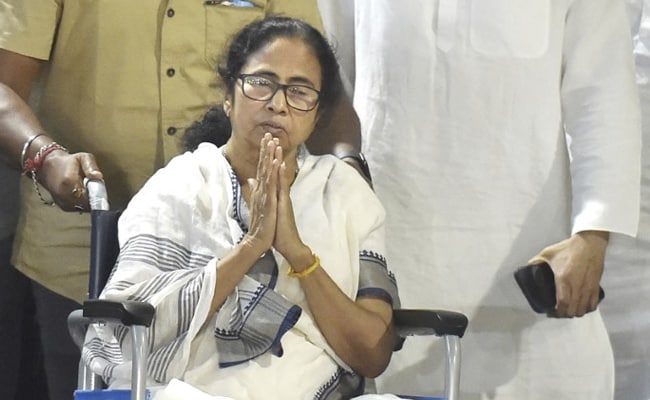 West Bengal Election: Mamata Banerjee was discharged from the hospital on March 12.

Four days after Bengal Chief Minister Mamata Banerjee was injured while campaigning in Nandigram, the 66-year-old Trinamool Congress chief will attend her first public event this afternoon. She will lead a huge roadshow in Kolkata in a wheelchair, her party has said. She will address the gathering at the end of the rally in Hazra.

After initially saying she was attacked by four-five unknown persons, in a subsequent video message from a hospital in Kolkata on Thursday, Ms Banerjee had said she was injured when a crowd surged around her car and pressed into her. The Trinamool Congress repeated the allegations of conspiracy in its memorandum to the Election Commission. Whether the door was intentionally slammed or accidentally is now a hot button political debate.

The BJP has been accusing Ms Banerjee of feigning an attack to gain public sympathy in a losing battle ahead of state elections.

Ms Banerjee sustained “severe bone injuries” on her left foot and ankle as well as bruises and injuries on her shoulder, forearm and neck, according to the report of her initial medical examination. She was released from hospital on Friday.

The Trinamool Congress wrote to the Election Commission alleging “a deep-rooted conspiracy to take the life” of its chief and linking it to the abrupt removal of the Bengal police chief a day before, for which it has blamed the BJP.

The BJP also urged the Election Commission to order a high-level investigation into Ms Banerjee’s allegations and to release video footage of the incident to establish what really happened.

Calling it a “gruesome attack” on the Chief Minister, the Trinamool Congress said an attempt was made on her life “within 24 hours of the removal of the Bengal police chief” by the Election Commission without the state government being consulted. The party alleged a “nexus” between the BJP’s complaints against the sacked police chief and the police being absent at the time of the incident.

On Friday, as Ms Banerjee was discharged, the medical board of the SSKM Hospital in Kolkata told reporters: “Chief Minister Mamata Banerjee has responded well to the treatment. The six-member board has re-examined her health condition. We have opened the plaster cast. Fresh plaster has been applied. She has been discharged with appropriate instructions, after her repeated requests. She has been advised to revisit after seven days.”

Ms Banerjee will contest against former aide Suvendu Adhikari, who is now with the BJP, in Nandigram.

Bengal will vote in eight rounds starting March 27 and the results will be declared on May 2.