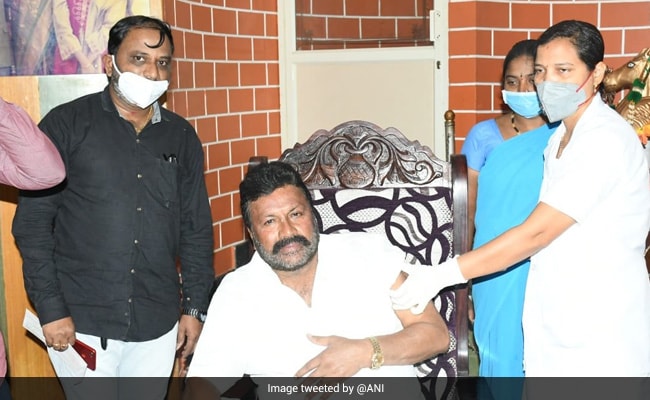 Karnataka Minister BC Patil took his coronavirus vaccine shot on Tuesday, joining a growing list of high-profile political figures – including Prime Minister Narendra Modi and Home Minister Amit Shah – in receiving the first of their two doses as part of the second phase of the national drive.

However, unlike PM Modi, Mr Shah and other senior leaders, such as Defence Minister Rajnath Singh and Health Minister Dr Harsh Vardhan, Mr Patil got his shot at his home in Haveri district.

The Prime Minister got his at Delhi’s AIIMS, Mr Shah at the Medanta Hospital in Gurgaon and Mr Singh at the Army Hospital (Research and Referral) in the national capital.

Mr Patil said the decision to get his shot at home – rather than in public to allay fears that the vaccines may be unsafe, and counter other reasons for hesitancy – would, actually, help people.

“If I go to the hospital to get vaccinated, people will have to wait due to my visit. But here I can attend to people and also can get vaccinated. What is wrong in this?” he was quoted by news agency ANI.

The centre, which has issued strict guidelines for the vaccination process, has responded.

‘This is not allowed in the protocol. We have asked for a report from the state government,” Union Health Secretary Rajesh Bhushan was quoted by ANI.

India began the second phase of the vaccination drive at 9 am Monday, shifting to the inoculation of around 27 crore people over 60 (and over 45 but with co-morbidities).

Registration can be done either via the CoWIN web portal or the Aarogya Setu app, with people given a choice of facility (government or private) from which to get the jab.

Vaccines will be administered at 10,000 government centres (where they will be free of cost) and 20,000 private ones (where prices will be capped at Rs 250 per dose).

On Monday PM Modi became the first to be vaccinated in the second phase.

Seizing the moment to do some messaging of his own, he was given Bharat Biotech’s Covaxin, which the centre has been criticised for allowing despite lack of late-stage trial data.

“Remarkable how our doctors and scientists have worked in quick time to strengthen the global fight against COVID-19,” he tweeted, sharing an image of himself taking the first dose.

Took my first dose of the COVID-19 vaccine at AIIMS.

Remarkable how our doctors and scientists have worked in quick time to strengthen the global fight against COVID-19.

I appeal to all those who are eligible to take the vaccine. Together, let us make India COVID-19 free! pic.twitter.com/5z5cvAoMrv

As of Tuesday morning India has reported over 1.68 lakh active Covid cases and over 1.57 lakh deaths. The total cases detected since the pandemic began in December 2019 is over 1.11 crore.