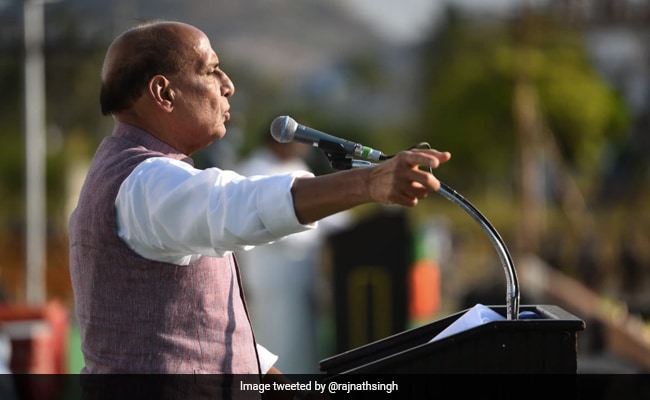 “It is a wonderful feeling to be in this culturally rich and divine land,” Rajnath Singh said.

Asserting that Prime Minister Narendra Modi has a “personal relationship” with Tamil Nadu, Defence Minister Rajnath Singh on Sunday said that the central government is committed to ensuring that Tamil refugees in Sri Lanka live with peace, equality and dignity.

Ahead of the Assembly polls in Tamil Nadu, Mr Singh addressed Bharatiya Janata Yuva Morcha (BJYM) convention here and said that he is proud to be in the land of great warriors like Rajaraja Chola and Rajendra Chola who were known for making an exemplary contribution in strengthening India’s Military and Naval capabilities.

“Former Prime Minister Atal Bihari Vajpayee made Dr APJ Abdul Kalam the President…was that not respect of Tamil Nadu? In 1974, when then Congress government left Katchatheevu island for Sri Lanka, Vajpayee condemned the decision to cede the island and spoke for moving to Supreme Court against it,” he said.

“BJP can never forget that it was Tamil Nadu’s daughter puruchi thalaivi Jaya Amma who wholeheartedly supported the first government of Atal Bihari Vajpayee,” he added.

Mr Singh said that similar to Mr Vajpayee, Prime Minister Modi also has a “personal relationship” with Tamil Nadu and it is reflected in his work.

“PM Modi has continuously tried for the empowerment of Tamil refugees in Sri Lanka. When Modi visited Sri Lanka after becoming Prime Minister in 2015, he also visited the Jaffna area (in Sri Lanka) and became the first Prime Minister of India to do so. New houses were given to about 27,000 Tamil brothers and sisters who had become ‘homeless’ due to the civil war there,” he said.

“Our government under the leadership of Prime Minister Modi is committed to ensuring that Tamil Refugees in Sri Lanka live with peace, equality and dignity. 16,00 fishermen have been released from Sri lankan government’s custody by the PM,” he added.

Praising the culture, tradition, poets and history of Tamil Nadu, stating that Tamil language is not only beautiful and ancient but “Amma” of all the Indian languages.

“It is a wonderful feeling to be in this culturally rich and divine land of Tamil Nadu, the land of the Siddhars, Alwars, and Nayanmars. Tamil Nadu is also the place where the great Saint of India, Mahatma Thiruvalluvar was born who gave us knowledge in the form of Thirukkural, who acts as a guiding light for all of us. Even the decisions are taken by the NDA government under PM Modi have been inspired by the ideals professed in Thirukkural,” he said.

The Defence Minister also mentioned Jallikattu, a centuries-old bull-taming sport, which was celebrated in the second week of January, during Pongal in Tamil Nadu.