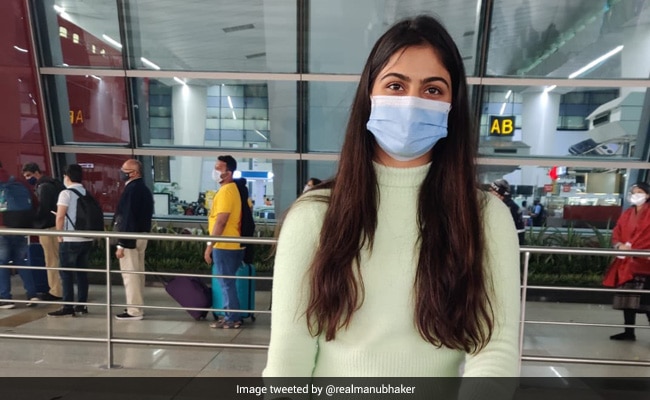 Manu Bhaker had alleged that the Air India employees had harassed her and snatched her phone.

Air India on Sunday refuted Indian Olympian and shooter Manu Bhaker’s allegations of harrassment by its officials at the Indira Gandhi International (IGI) airport while she was trying to board a flight from Delhi to Bhopal, noting that the CCTV footage indicates otherwise.

Ms Bhakar had alleged that she was stopped from boarding an Air India flight from Delhi on Friday unless she coughed up over Rs 10,000 as she was carrying weapons and ammunition for her training.

She had also alleged that the Air India employees had harassed her, snatching her phone when she tried to take their pictures, and made her feel like a “criminal.”

Rebutting the shooter’s claims, Air India said that only the “legitimate documents were asked for, contrary to the allegations made.”

“After verification of documents shown by Ms Bhaker, the Security Officials informed her that the document required for exemption of payment of handling charge for carriage of arms, as per laid down norms, is not there and, as such, fixed charges for the carriage of arms would have to be paid,” it said.

The airline, in its statement, also said that it was explained to Ms Bhaker as to why the documents for exemption shown by her was not valid.

Further, Air India said that its employee, Manoj Gupta, whom Ms Bhaker alleged had harassed her, had at no point, communicated directly with Ms Bhaker.

“This is also corroborated by the CCTV footage. Hence, the allegation of misbehaviour by him simply does not arise. The CCTV footage also nullifies the passenger’s allegation of bribes being asked for and snatching of mobile phone,” the statement read.

The 19-year-old shooter, who was travelling with her mother, taken to Twitter to share her ordeal. “Manoj Gupta (Air India official) is treating me like I am a criminal. Also his security in-charge. Such people need basic training of behaviour hopefully aviation ministry will find out…,” she wrote on Twitter, sharing a picture of the Air India official.

She had eventually managed to board the aircraft on Friday evening after the intervention of Sports Minister Kiren Rijiju.

“You are India’s pride @realmanubhaker,” Mr Rijiju had said.

The airline futher said, as a responsible airline, always adheres to the rules and regulations governing operations. “In this case also, Air India was only following the protocol regarding such a sensitive activity like the carriage of arms on board,” it said.

“Air India has always encouraged and has the highest respect for Sports and Sportspersons and have many eminent sports legends who have done Air India and India proud over decades,” it added.